10 Drawings of the World’s Most Iconic Modernist Architecture

Have you got awesome architectural drawings to share? If so, we want to hear from you: Register for the One Drawing Challenge for a chance to win $2,500!

Derived from innovations in construction technology and a desire to break away from historical architectural styles, Modernism grew to become one of the most dominant architectural movements of the 20th Century. It followed the principle idea that form should follow function, which saw an embrace of minimalism and a rejection of ornament. While too broad to define succinctly, Modernist architecture typically championed the use of glass, steel and reinforced concrete to build structures defined by light, open spaces and bold, distinctive volumes. Some of architecture’s most profound figures were pioneers of Modernism, including Le Corbusier, Ludwig Mies van der Rohe and Frank Lloyd Wright.

As you consider which of your drawings to submit for the Second Annual One Drawing Challenge — architecture’s biggest drawing competition with two Grand Prizes of $2,500 — get inspired by these incredible hand-drawn sketches of Modernism’s most iconic structures. Le Corbusier was, one of, if not the most, renown pioneers of modern architecture, belonging to the craft’s first generation of the International Style. He was equally influential as an urban planner, painter and writer, with a career spanning five decades and body of work that can be seen across the world.

One of Le Corbusier’s most famous works and an icon of modernist architecture is the Villa Savoye. This is an original sketch by the architect, showcasing the elevation of the structures southwest façade. Drawn in pencil and white pastel on trace, it focuses on the composition and proportions of the openings and piloti. American architect, interior designer, writer and educator Frank Lloyd Wright arguably paved the way for contemporary architecture in the United States. His career spanned more than 70 years, during which time he designed more than 1,000 structures. One of Wright’s most celebrated projects, exemplifying the architect’s modernist values, is Fallingwater. This sketch of the iconic house was drawn by Chilean architect and illustrator Diego Inzunza as part of his “Architectural Classics” series. 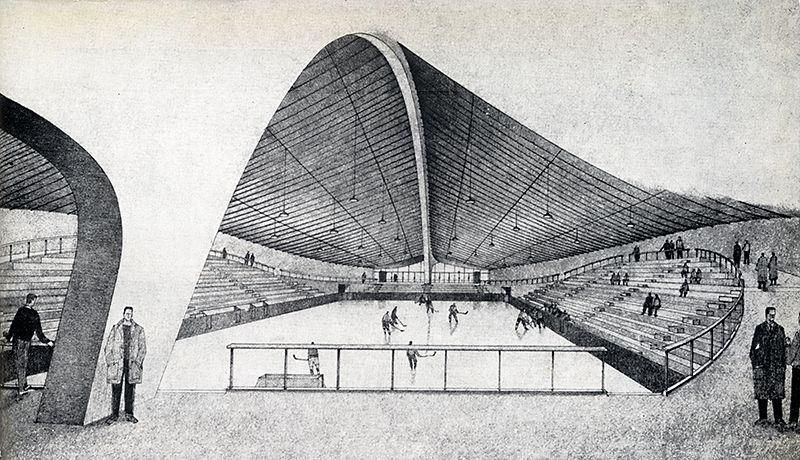 The David S. Ingalls Rink is a hockey rink designed by Eero Saarinen that was built for Yale University. It is also referred to as The Whale, due to its whale-like form. The rink employs a 90-meter reinforced concrete arch, a component that Saarinen’s projects became known for, such as The Gateway Arch in St. Louis, Missouri. This sketch highlights the structure’s unique curvature. The Barcelona Pavilion was designed by German-American architect, Ludwig Mies van der Rohe, another iconic pioneer of modernist architecture. It was built as part of the German Pavilion for the 1929 International Exposition in Barcelona, Spain. A significant building in the history of modern architecture, the structure is known for its simple form and use of extravagant materials, such as marble, red onyx and travertine. The drawing was made by Mies, depicting the interior of the pavilion. Another prominent piece of modern architecture designed by Ludwig Mies van der Rohe is S.R. Crown Hall in Chicago, Illinois. It is home of the College of Architecture at the Illinois Institute of Technology, whose campus features dozens of buildings designed by the German architect. Crown Hall is architecturally significant and regarded as one of Mies van der Rohe’s masterpieces because of how he was able to refine the basic steel and glass construction style. The building captures simplicity and openness for endless uses. While incredibly minimal and abstract, this sketch by Mies captures the essence of Crown Hall, open and symmetrical. The Bauhaus Building in Dessau by Walter Gropius, 1925; image via flickr

The Bauhaus Building in Dessau by Walter Gropius, 1925

One of the most influential forces behind modern architecture, design and architectural education was the Bauhaus. The school was founded by architect Walter Gropius, who is regarded as one of the pioneering masters of modernist architecture and the International Style.

The school’s facility in Dessau was designed by Gropius. He designed the various sections of the building differently, separating them according to function. The proliferation of glass and transparency are also key characteristics of the school. These sketches showcase the various pieces of the complex that come together to form the dynamic, asymmetrical structure. The Lovell Health House is a modernist residence that was designed and built by Richard Neutra in 1928. It is regarded as a pillar in architectural history and is the most famous project of Neutra’s career. As seen in this  perspective drawing by Neutra, the house follows many of the principles that came to define the International Style. The Glass House by Philip Johnson, 1949

Designed by famed American architect Philip Johnson, Glass House is a historic home, considered to be one of the most exceptional works of modern architecture. It’s minimal structure, open floor plan and floor-to-ceiling glass façade are very reminiscent of Johnson’s mentor, Mies van der Rohe’s, Farnsworth House. This hand drawn sketch, also made by Diego Inzunza, reflects the structure’s simplicity and alignment with its natural surroundings. The Solomon R. Guggenheim Museum was the last major project designed and built by Frank Lloyd Wright, opening in 1959, six months after his death. One of the most notable architectural works in the world, the Guggenheim stands out with its smooth, white concrete structure and swirling, cylindrical form. The museum’s curvature is even more impactful from within, in which visitors are met with a massive atrium and steadily ascending path that leads to the sky.

This sketch of the Guggenheim was drawn by architect and artist Marion Mahony Griffin. One of the first licensed female architects in the world, Griffin worked with Frank Lloyd Wright, producing many beautiful watercolor renderings of buildings and landscapes that became known as a staple of Wright’s style. This is a selection from Pritzker Prize-winning architect, Tadao Ando’s sketchbook. It depicts 152 Elizabeth Street, a condominium in New York City that stands out with its tall glass windows and poured-in-place concrete panels. The illustration is both minimal and expressive, providing the key elements of the structure.

Now it’s your turn: Register for the One Drawing Challenge and submit your best architectural drawing for a chance to win $2,500!

Register for the One Drawing Challenge

The post 10 Drawings of the World’s Most Iconic Modernist Architecture appeared first on Journal.